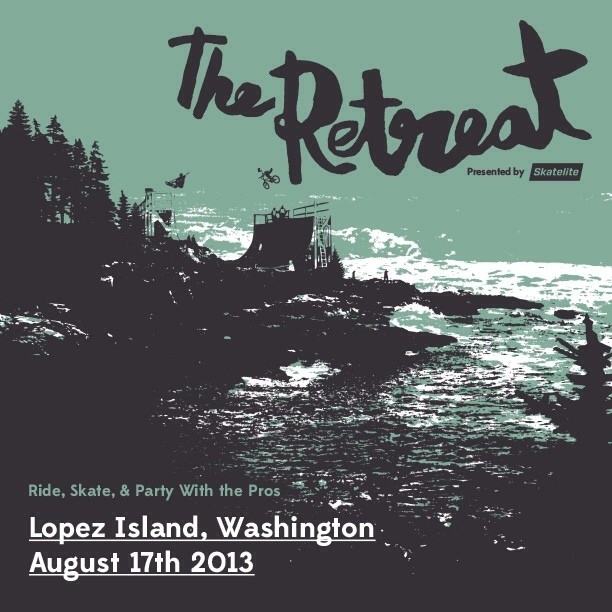 TACOMA, Wash. (July 2, 2013) – Skatelite, manufacturer of the world’s premier skate ramp surface materials, today announced plans for The Retreat, a skate and BMX festival featuring more than 15 of the world’s top pro athletes. The Retreat is a mix of a jam session with the athletes, a party and a vacation for legendary and groundbreaking skaters and BMX riders to kickback and let loose after the frenzy of the competition season. The event is free to the public and offers a once-in-a-lifetime opportunity to skate, ride and rub elbows with the pros that built and are defining the future of their sports.

Guests who plan to attend the The Retreat can make a weekend out of it by staying at Camp Skatelite, a 40-acre field with its own 35-foot mini ramp, a nightly bonfire and amenities designated just for the event. Guests who arrive on August 17 can skate and ride with the pros during open sessions, and enjoy music, films and food. Festivities begin at 9 a.m. with the dedication of a new skate park that Skatelite is donating to the island residents. California RampWorks, the builder behind the ramps at every major international competition will bring up their vert ramp directly following the X Games in Los Angeles for the athlete sessions at The Retreat.

Music begins at 6 p.m. with live performances by The Good Husbands, several DJs and a special guest that alone is worth the trip. Free parking and shuttle transportation for ferry walk-ons will be provided by Skatelite from downtown Anacortes to the ferry dock and from the Lopez ferry terminal to The Retreat (held at the Lopez Island Community Center) and Camp Skatelite.

Skatelite is a division of Richlite Co., a family-owned Tacoma, Wash.-based manufacturer, celebrating its 70th year of operation in 2013. Skatelite is a weatherproof, durable paper-composite material that has been manufactured in Tacoma since day one. Today Skatelite is recognized as the preferred ramp surface material used in every major international skate and BMX vert and park competition and by top pros in their personal ramps. For more information and to make reservations for The Retreat, visit Skatelite.com/the-retreat.